MobileFamilyTree 10 is exclusively available at the App Store and requires an iPhone or iPad with iOS 14 or newer. iOS 16 is fully supported. 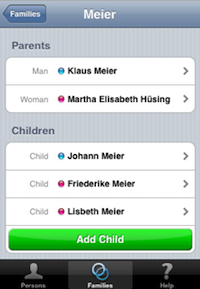 In June 2008, the iOS App Store was opened. "Wouldn’t it be practical to be able to use one’s family tree on the road or to be able to edit it right at the family reunion? Without the requirement for a desktop computer?" we thought to ourselves… and after a few weeks or hard work around the clock, the first version of MobileFamilyTree was done. Even this first version allowed synching with MacFamilyTree, displaying and editing data on iPhone and iPod touch. The functionality was limited but we were able to offer the first genealogy app. 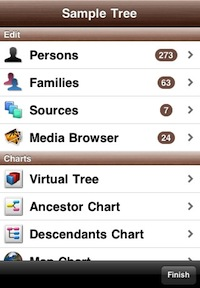 A little over a year later, the first big update was released: MobileFamilyTree 2. Not only did version 2 show persons and families, but was able to display almost everything MacFamilyTree displays. The new features it offered were the virtual tree, the map view with Google Maps, the family quiz and a new media browser. One limitation, however, stayed: MacFamilyTree was still required alongside on a Mac, MobileFamilyTree still only was a companion app. The computing power of the first iPhone simply was not enough to import big databases on its own, so that work had to be done by a Mac and MacFamilyTree. 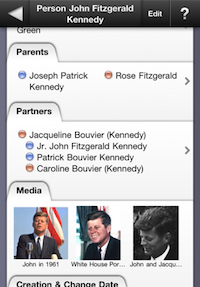 After having introduced the first genealogy app ever, in the summer of 2011, we introduced MobileFamilyTree Pro, the first independent standalone genealogy app for iPad, iPhone and iPod touch. This no longer was a companion app that required MacFamilyTree on a Mac. We actually ported MacFamilyTree to iOS. This could be used independently of a computer. Almost every function from diagrams to different views and reports from MacFamilyTree on an iPhone or iPad – This was a first. And still is. Even two years later, nothing remotely similar is available. 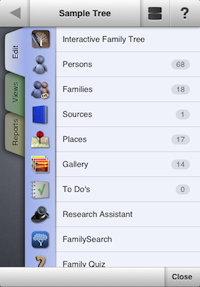 15 years of MacFamilyTree and 5 years of MobileFamilyTree. For their birthdays, both applications receive a huge update. MobileFamilyTree 7, of course, is a standalone application and is capable of everything that MacFamilyTree 7 is. One of the outstanding improvements is the incorporation of iCloud that enables you to sync your family trees on all iCloud-capable devices without any hassle, no configuration required. Also, MobileFamilyTree 7 now has an even more streamlined and modern interface, generates new reports and even sports FamilySearch integration. FamilySearch is the world’s biggest online genealogy database with about one billion entries. Without further charge! We are very proud of the next generation of mobile genealogy and are thrilled to be able to offer you even better ways to explore your family’s history. 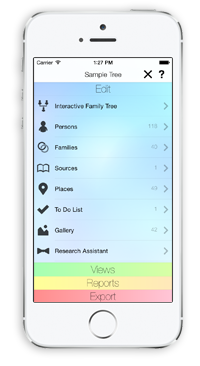 With iOS 7, Apple presented a fully redesigned operating system where nothing had been left untouched. MobileFamilyTree 7.1 follows the same path and also comes with a fully redesigned look. We have taken this opportunity to make our app even more user-friendly, primarily by making it easier for you to access all important features and views. The main navigation and all views are in line with Apple's new design specifications, yet carry MobileFamilyTree's signature style. Moreover, MobileFamilyTree 7.1 offers many additional features, including AirPlay, Statistics Maps, the new Interactive Tree and a customizable file export feature via GEDCOM. 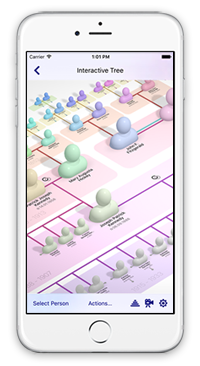 In the spring of 2016, we launched MacFamilyTree’s brand new version 8, which was showcased for the first time at Who Do You Think You Are in Birmingham. ?Version 8 led a revolution in mobile genealogy. With CloudTree Sync & Share it was now possible to invite any number of users to contribute to one collective family tree directly within the app – fast, in real time, reliably, and in line with the highest data protection standards. As usual, we provided version 8 customers with countless large and free updates, adding a plethora of new additional features.

MobileFamilyTree 9 was released in 2019, 21 years after the launch of the first version. Not only did MobileFamilyTree 9 come with a new user interface, it also offered customers the best and most versatile charting and reporting system they’ve ever experienced. On top of being visually appealing, it also included plenty of options for customization, going far beyond anything you had experienced thus far. More new features: MobileFamilyTree also let you store DNA test results for the first time. 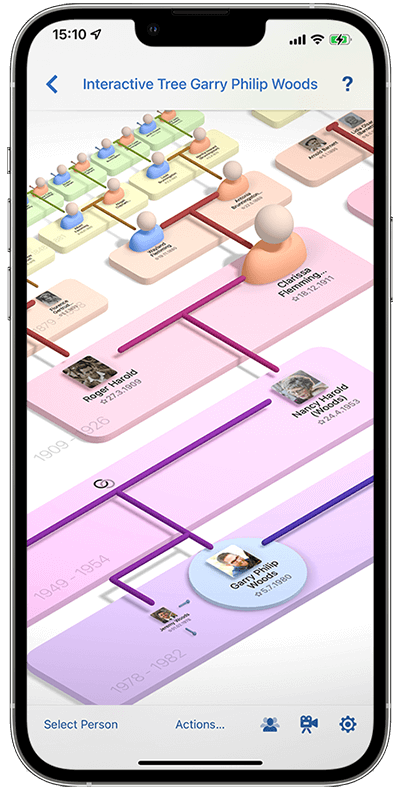 Three years later, MobileFamilyTree turns 15 and version 10 was released. Both in pure working time and scope of improvements, it is the biggest update in product history to date. The fundamentally redesigned edit section, significant new versions of the Virtual Tree as well as Virtual Globe and Interactive Tree, an even more modern interface in the design language of the current macOS versions as well as the best source management that MobileFamilyTree ever sported - all this makes version 10 a groundbreaking update. MobileFamilyTree 10 offers yet another innovation: The Virtual Tree's AR mode makes it possible to literally walk through your family history. Try it out!